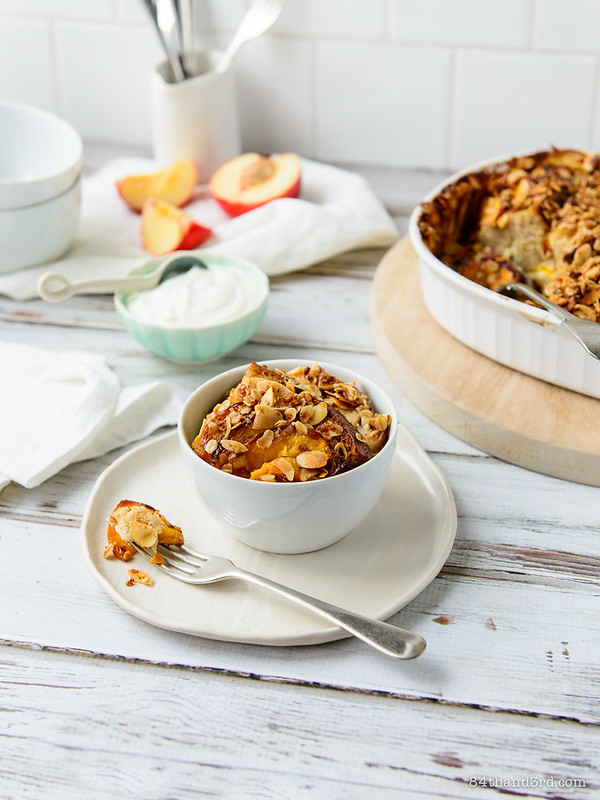 Santa came to our house a day early when I was growing up. Mom said it was because he knew we drove to my grandmother’s farm on Christmas Eve day so he stopped at our place first, ensuring the presents were ready and waiting on the morning of December 24.

We’d wake up early, collecting stockings from the staircase on our way down to the tree, eat baked french toast for breakfast, pack, pile into the car and for the next 8 hours — over the river and through the woods, obviously — to grandmother’s house we’d go. 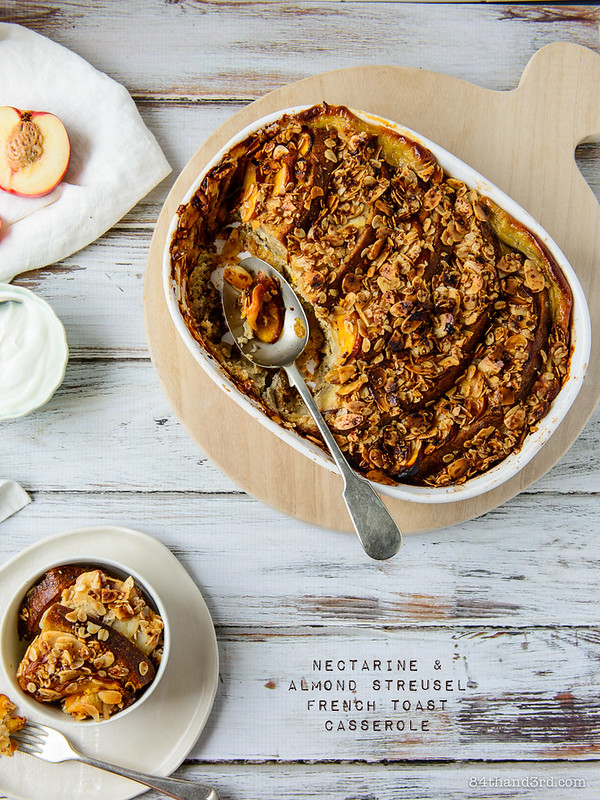 Memories are a strange thing though, they get stirred and shaken though life. Whisked together into the best (or sometimes worst) versions of themselves.

Take for example my vivid memories of Baked French Toast on Christmas morning. It’s there, clear as day, however on closer examination I can only ever remember two specific mornings where a tray of baked French toast was present — and I was the one who made it in my mothers kitchen indicating I was well into adulthood, or at the very least my late teens. 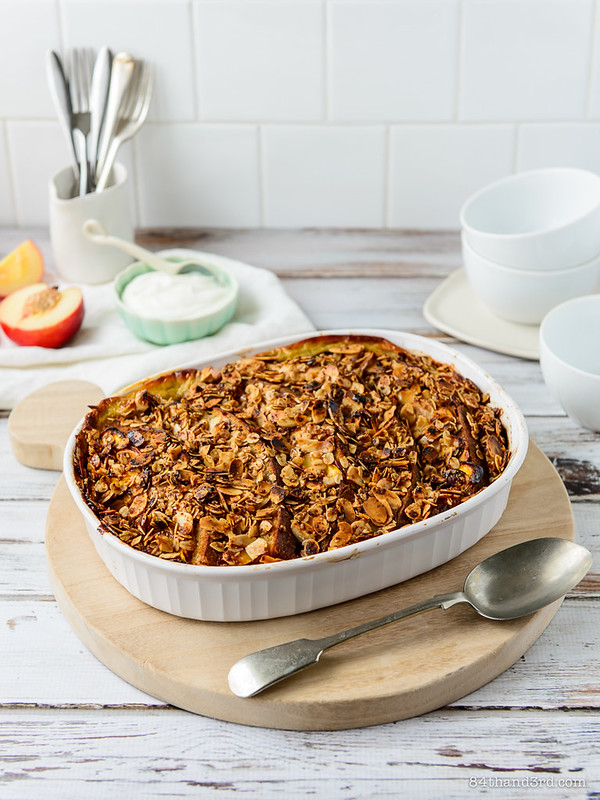 So where does the memory come from? I think in this case it’s fuelled by some kind of Christmas morning meal that must have existed, French Toast on Easter morning (although that may have been waffles…), and a sprinkling of plenty of breakfast for dinner meals growing up.

A pinch of each aforementioned memory, as well as a very vivid recollection of the yeast-dough peach cake that would accompany us up to the farm for Christmas Day, have all been rolled together into a big-ol French Toast Casserole concoction. The fact that in the Southern Hemisphere Christmas falls in summer, and summer, no matter where you are means fruit, is simply a happy coincidence. 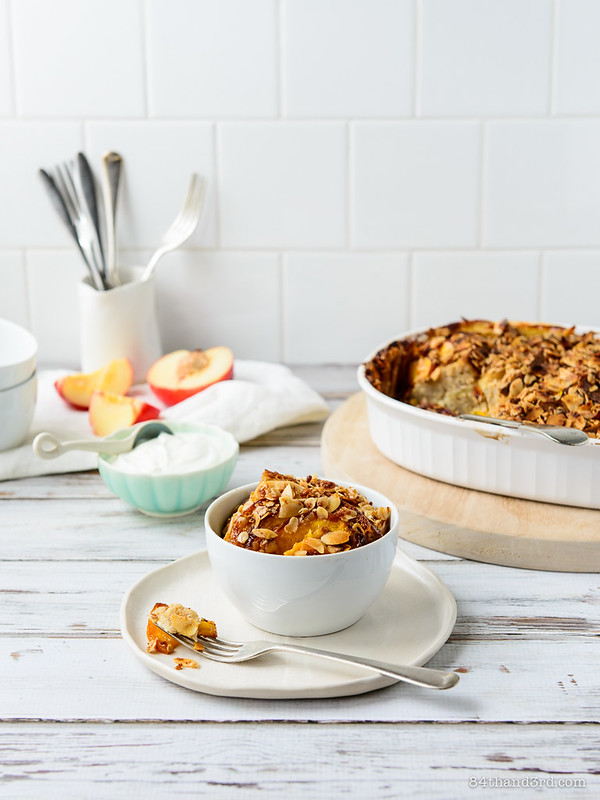 The fact that I’ve created a breakfast recipe as part of a virtual Christmas lunch party should not surprise you much – ha! You can see what everyone else has been up to below the recipe.

The sticky, almost bruleed almond streusel topping and heavy-handed glug of Amaretto are my early Christmas gift to you. 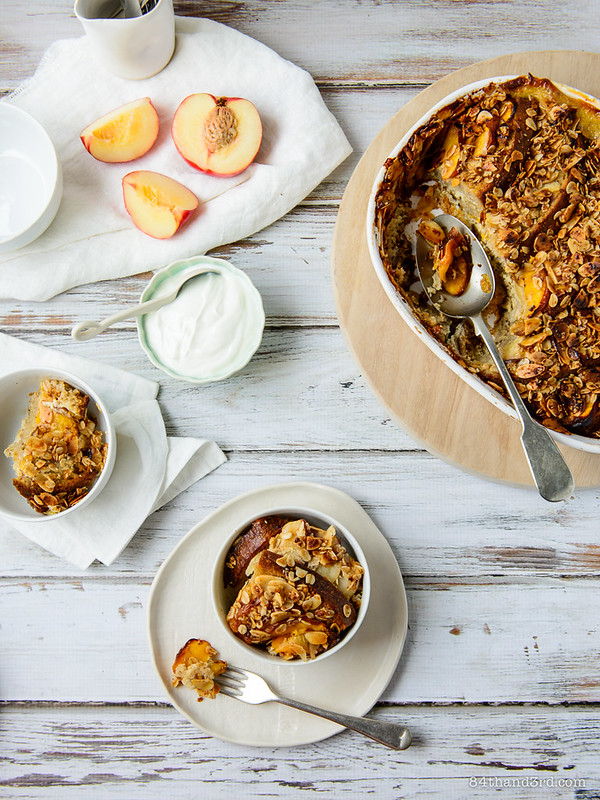 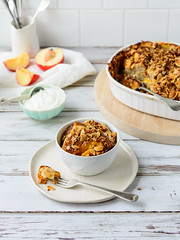 French toast without the skillet, sandwiched with sweet nectarines, covered in crunchy, sticky almonds, baked while you open gifts. Now that’s a Christmas surprise if I’ve ever seen one.

In theory you could make this up the night before, let it spend the night in the fridge to soak and bake in the morning, it may however need an extra 10-15 mins to counteract the fact that it’s starting off far colder from the fridge than otherwise.

Cut nectarines into quarters, and each quarter into five slices and lightly oil a 6 cup (18 oz, 1.5 ltr) baking dish. Place a slice of bread into the far end of the dish and cover with a generous layer of fruit. Repeat with remaining bread and fruit to fill dish.

Whisk eggs, milks, vanilla, syrup, amaretto, spices and salt in a large jug. Slowly pour over layered bread. Place a tray on top of the french toast bake and weigh down with a couple of cans for 15 mins while the oven preheats to 180°C (350°F).

To prepare streusel topping combine dry ingredients in a bowl. Add oil and toss to combine well. Remove tray and weights from pan , sprinkle over streusel and bake 50-55 mins until golden and firm.

Cool on a rack at least 15 mins before cutting to allow the casserole to set. Serve with coconut yoghurt, ricotta, creme fraiche, coconut cream, natural yoghurt, or nothing at all. 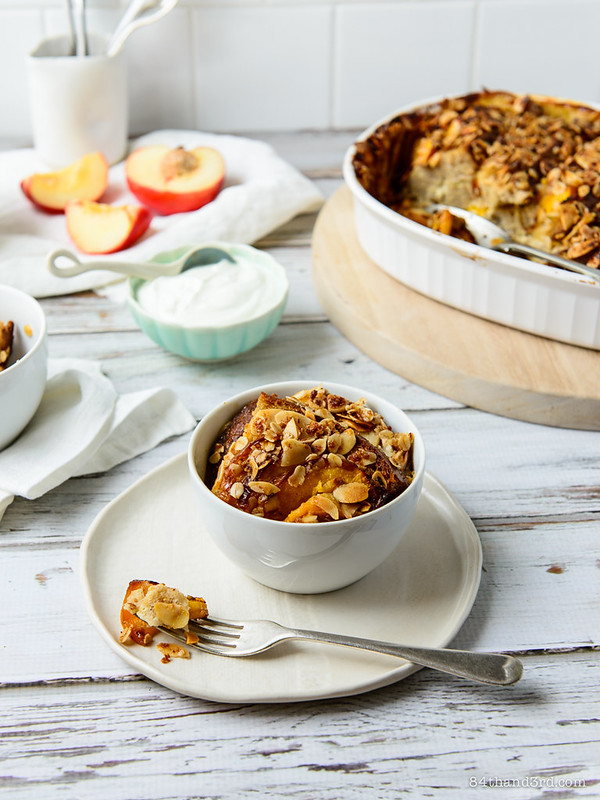 This recipe is part of a Virtual Christmas Lunch Party with some other Aussie Food Bloggers. Not surprisingly most of the shared recipes are dessert — not too far off any bring-a-plate gathering we tend to have in person — ha! Thanks to Bec for organising, and make sure to check out the other recipes for a good dose of holiday table inspiration.