After wanting a cast iron grill pan for ages RJ got me one for Christmas a couple of years ago. It was already seasoned so after a quick wash I put it to use — only to realise a pile of marinated veggies and chicken breast later that I had no idea how to clean the darn thing. I grew up using mom’s cast iron pans so I was well aware that they should never be washed with soap as it strips off all the layers of seasoning, rendering them the opposite of non-stick and terribly prone to rust.

I vaguely remember simply wiping them out with an oiled paper towel and calling it a day — but on my new grill pan that caused more of a mess than it solved. 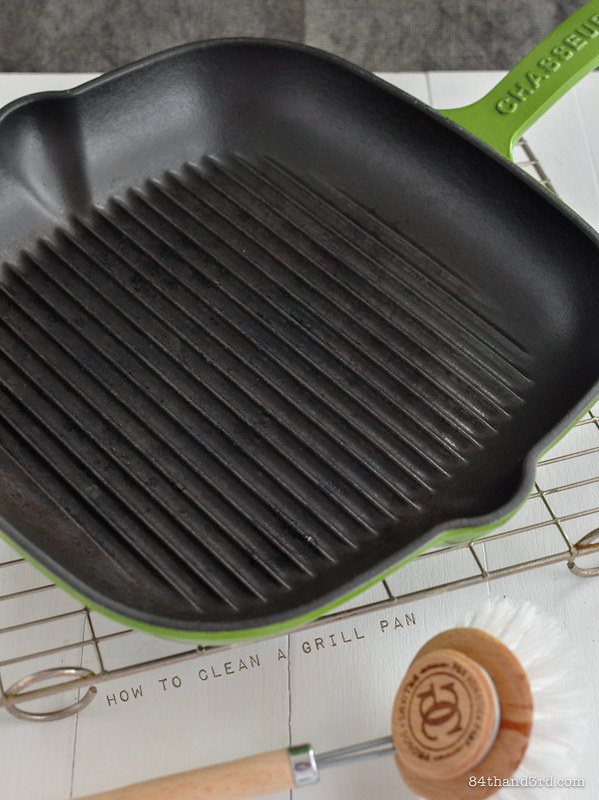 I ended up washing the grill pan with a plastic scrubber side of a sponge and some warm water then heating the empty pan and trying to clean off the rest with paper towel and oil. It was an obnoxious and not particularly effective method and I mentioned as much in a post a month or so later.

The internets came to the rescue and the lovely Heidi Annie mentioned that she uses hot water and a stiff brush. With nothing to lose I made sticky grilled chicken for RJ that very night and gave the technique a go.

It not only worked a treat — within moments I had a clean pan with no struggle — but left behind a lovely new layer of seasoning. Genius.

My next realisation was that I could clean my non-stick pans this same way, in effect seasoning them and protecting the finish at the same time. It worked so well that it has even brought back from the brink an omelet pan that was almost destroyed by an overzealous house-sitter…

Now I do still use a plastic scrubber on my stainless steel pans with no adverse effects but for everything else — hot water and a brush is it! How To Clean a Grill Pan

Allow used grill pan to cool (I’ve been known to leave it overnight on occasion, oops).

Run very hot water over pan for a few seconds before scrubbing with the brush. Rinse with very hot water and repeat process as necessary until food residue is removed, leaving any oil on the pan.

Blot with a paper towel if you wish and allow to dry completely before storing. How to Clean & Restore a White Leather Handbag